Blood Bowl is Back!

Blood Bowl is back, baby!

Back when in 1994, my buddy, Peder convinced me to play his new set of Blood Bowl. In his grandma's flat,  we'd share a bottle of coke and roll dice for hours. He chose orcs from the box and after having to play humans for a while, I wanted something bashy. So I chose the Chaos team!

Since my old metal chaos team is scattered across the world in oblivion now, (I think part of it is in my parents basement somewhere) I had to build a new team from random parts in my collection. Necessity (and being cheap) is the mother of conversions.

The chaos team is made up of Chaos Warriors, well-armored tough guys, and Beastmen, whose only notable trait is a set of horns. Minotaurs are part of the team, too, but I haven't taken one.

My team is converted from whatever miniatures I had available to fit the part - Khorne Bloodreavers, old Beastmen heads, Ork shoulderpads, old chaos warriors, and even older chaos warriors. 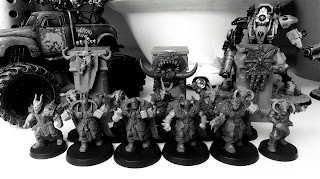 The dwarf pillars from the Mines of Moria set have been adorned with the icons of the Chaos Gods, to serve as the team's alters of evil...and in game as my team re-roll counters.
You need such things to win the favor of the Gods.
The Chaos Team is pretty bad at Blood Bowl for the first 3-5 games of a league. They start without any of the core Blood Bowl skills, like Block, Pass, dodge, and Sure Hands. With no skills to help them win games, the Children of Chaos must appease the Gods in hopes of good die-rolls.
If the team is able to attract the Hand of Fate, the team will be rewarded with the Star Player Points (SPPs), needed to get the skills and mutations to become a formidable team....but only if the Hands of Fate deem it so.

In fact, once the team has some experienced players, Chaos become one of the more versatile team with access to bashing skills, and mutations that make the team better at handling and running the ball.

My team consist of 7 Beastmen, 4 Chaos Warriors, and 3 re-rolls. And I don't see how any other starting roster could be better.

The key with Chaos is to accept that winning your first games is unlikely so it's best to minimize losses and bash heads where possible. That's the plan at least, once I've got some star player rolls, I'll get concerned with scoring touchdowns. Such is the glory of Chaos teams!